This is the development blog for Virtual Miniatures.  The hope is that we can share our progress in the making of a "Digital tabletop experience".

What we're working on is a game that will be played on your computer, but will try as hard as possible to play like a traditional tabletop miniatures game.

We're tabletop gamer's, we love to gather around a miniature battlefield with friends, roll dice, share some laughs, and compete for the win!  The problem is as we've gotten older the opportunity to gather with friends and play has reduced.  So we had a vision, to build a game we could play online, but would go as far as possible to scratching the itch of playing a real miniatures battle.

I'm a software engineer, have been for 20 years.  I've worked on all kinds of technical projects and this one really excites me.  I wanted to make this first post about the vision we have; what we are doing, and why.


It starts with the game

The most important thing is to build a great turn-based strategy game.  We're approaching this as we would if the game was a physical tabletop experience rather than a virtual one; starting with the rules.  You can download the first version of our rules here.

A window to the virtual world

Once we had a first draft set of rules we started translating them into code to make a playable prototype.  What was important to us was to make the experience feel like a window to a tabletop experience rather than a video-game.  Below you can see a screenshot from our first prototype. 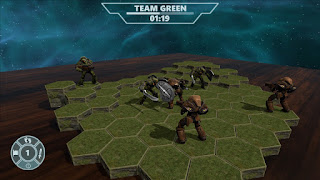 Strategy in many forms

We remember all those hours in our youth spent perfecting the perfect "army-list", and the discussions with friends that could go on for days, long before a single dice was thrown and a list truly tested.  We desperately want to recapture the buzz of the army-list, so it's important that we provide many opportunities for customization of an army, and plenty of options for different factions.

As we're building a game that will be governed by the computer, it occurred to us that we can increase complexity within the game, without increasing the complexity for the player.  One example of this is our "unit-shield" and "friendly-fire" rules that we feel can bring increased strategy to game play, making maneuvers such as flanking a real strategic threat.  You can read more on this in our rules here.

Playing with friends in a community

We have a concern that video-games can (not always I stress) be played in a disrespectful manner.  We don't want people to give our game a try, only to be put off by being matched with an opponent who perhaps acts less in the way we'd expect from a tabletop gamer.

To combat this we hope to build a thriving community within a mini social-network of sorts.  The idea is you will only be matched or given the opportunity to play against friends within the network.

We'll leverage this network to run tournaments, league's and other competitions.  Not to forget the network will allow players to discuss all kinds of things about the game such as battle strategy, army-list creation, and whatever else players want to talk about.

Finally we'd like to add the ability to create and share battle-reports.  The game will allow players to review their completed battles, grab camera shots from pivotal moments and then compile them into a battle-report they themselves can write.  We love reading battle-reports, and we're sure many of you do too.

We really want the Virtual Miniatures experience to be something you can indulge in whenever you have some free time.  To aid in this we hope to release a companion mobile app that will allow you to create and tinker with army-lists, interact with the community, read battle-reports and more.

Making the vision a reality

We intend to release the first beta of the game with 2 factions, but then provide expansions including new factions, weapons, and additions to existing factions as time goes on.

The network is set to be released as part of the beta to facility multiplayer options although it's full feature set will come over time.  The mobile app will come after the beta release.

Help us help you help us

We have a lot of ideas about how we can best approximate a tabletop experience on your computer; and about the rules to which the game should be played.  But the game is not just for us, so we'd love to hear any ideas, thoughts or anything really that you think could make the experience better.  Drop us an email ideas@virtualminiatures.com .  Thanks in advance.
Posted by Martyn at 11:42 AM