If you've been following our early blog posts you'll of seen that we have been doing some play testing of late.  As we've said before our primary focus is to build a great strategy game, if it's not fun and exciting what's the point.

We've made some bold statements about how the rules we've created along with the way our game-engine interprets these rules will allow you to have some truly fantastic battles where the commander with the best strategy and tactics will attain victory.

First I'd like to explain what we here at VM mean when we talk about strategy and tactics.  This is just how we think about it, it's not necessarily the correct definition, but by understanding how we use these terms you will better understand how our game interprets them.

Strategy is the grand plan you as a commander have for a battle.  It starts with the miniatures you select as to make up your army.  It then continues into how you choose to deploy those miniatures, and the overall plan you have for them.  For example I decide that I intend to play a battle from a defensive stand-point.  As such I plan to do minimal advancing of my units, but rather lay in wait for the enemy.  As such I may choose an army roster consisting primarily of miniatures equipped with long to medium ranged weapons, and have minimal melee capability.  I may look to deploy my miniatures on the higher ground to maximize line of sight against the oncoming enemy.  All of this is my strategy, planned out before battle commences.  As the battle takes place my strategy may be forced to change, but ideally I'd like to be able to stick to it and follow my plan.

Tactics are all the little opportunities a commander has to gain the advantage throughout the battle.  A commanders strategy will likely contain numerous tactics such as holding the high ground for best line-of-sight.  But a successful commander will always be watching for new opportunities to use tactics to turn a battle in their favor.

We have been testing numerous tactics within our engine, and we'd like to share some of the results so you can see how tactics will be able to give you an edge in battle.  Are rules have been updated as part of this testing, and we'll be posting the latest version very soon.


Effective use of cover


Line of sight is an important concept within the game.  If one miniature is firing on another miniature that is partially obscured by an object within the environment, then a modifier is applied to that ballistic attack (as the miniature is said to be "behind cover").  However one recent update to our rules is that if the miniature being fired upon is directly adjacent to the object providing cover then an additional modifier is applied making them even more difficult to hit.  Consider the two scenario's below. 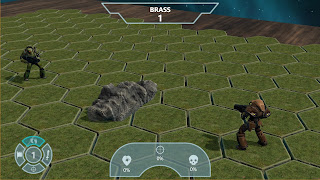 In this first scenario (above) both miniatures are being offered cover from one another by the rock directly between them.  As a result both miniatures will receive the same negative modifier to hit the opposing unit.  In our test we used two opposing Starsapien Shock-Troop, the result of equal stats and equal modifiers made for a pretty equal distribution of success.  Green actually fared better purely by the luck of the virtual dice. 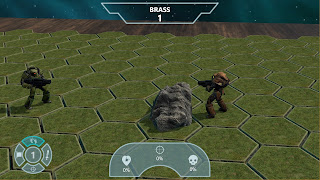 
The lesson here?  Have your miniatures hug cover whenever possible.


When no cover is available, use other miniatures

We did some extensive testing of our "unit shield" mechanism and got great results.  Once again consider these two scenario's. 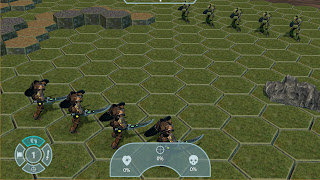 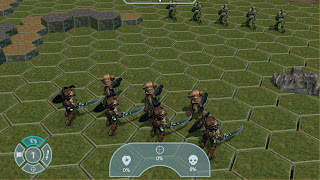 In the second scenario we add three Starsapien Shock-Troops to the brass deployment acting as a "unit shield" to the Lancer's.  In this scenario the brass Lancer's did nothing other than act as a shield, moving forward in front of the Lancer's, they did not fire (as they would in a real battle).  Again the green Shock-Troops were always given the initiative and they only targeted the Lancer's.  As a result of the "unit shield" the green Shock-Troops received a negative modifier on their ballistic attacks.  The results were highly effective, in every test at least one Lancer was able to engage the enemy in Melee combat.  In the best case not a single Lancer was lost before engaging the enemy.

The lesson here?  If your strategy requires a certain miniature or miniatures to survive, consider using less important miniatures as a shield.

If you're familiar with our rules you'll know that when firing past one of your own units you risk the possibility of hitting them, what we refer to as "Friendly Fire".  Consider the scenario below: 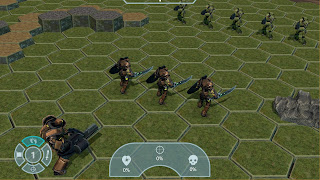 In this scenario the three brass Lancers are offering a unit shield to the Starsapien Heavy, the problem is that when the Heavy fires its Photon Cannon on the enemy Shock-Troops, it risks the possibility of hitting one of its own Lancers.  This was troubling for us as we wanted players to have the possibility of providing a unit shield to firing miniatures.  To accomplish this we once again made use of the concept of being adjacent.  If a firing unit is firing through a friendly unit that is directly adjacent to them, then the friendly fire rule does NOT apply.

The scenario below is an example of this. 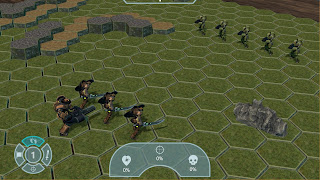 These new rules will be posted very soon.


Line of sight and the higher ground

This is a relatively obvious concept, but consider using the higher ground to provide better line of sight on the enemy.  In the example below, the brass Starsapien Heavy is able to negate the unit shield provided by the Shock-Troops when firing upon the green heavy, all because they have a higher vantage point. 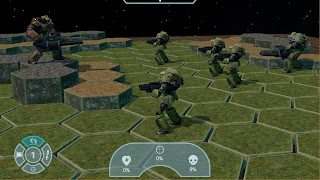 We'll continue testing and tweaking our rules over the coming months leading up to our Beta launch.  If you have any thoughts or feedback please don't hesitate to add a comment below, send us a message on Facebook, or email us at ideas@virtualminiatures.com